Hubble Homes and The Least join the Fight Against Cancer 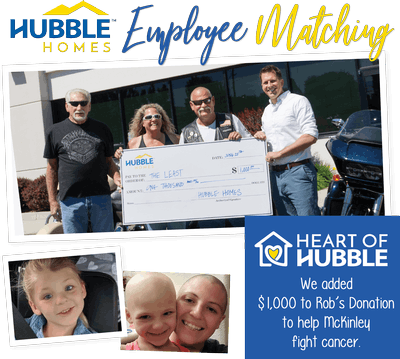 Senior Project Manager, Rob Matthews, has been with Hubble Homes for the past eight years. When he is not overseeing and building our homes, he is participating in a motorcycle club that he is the Founder of called “The Least”.

Rob wanted to give back to his town of Emmett after community members helped him during a difficult financial time, following a heart surgery that he had. “The Least” began as a way for Rob to provide financial support and well wishes to others in need. That mission has now expanded from serving the people of Emmett to helping the people of Boise, Caldwell, Rupert, South Dakota, and most recently, Nevada. "The Least" maintains a low profile, but has been a beacon of hope for the community since 2009. The name of the group stems from a passage in Matthew that says "Whatever you do the least of these, you do to me."

Recently, the group was introduced to the idea of helping a young girl from Nevada who is battling cancer. This is the story they heard:

"Last Thursday I took McKinley to the hospital for a lump in her belly of which we thought was constipation. After ultrasound and CT scans it came back a mass and more than likely a tumor. Our world was flipped, smashed, hit by a bus, anything you can imagine. A parent’s biggest fear coming true. McKinley had a tumor. The next day, we met with a doctor at Cure 4 the kids and brought the CD with the photos of ultrasound and CT scan. After the doctors looked it over, they confirmed it was a tumor. Kinley was taken back for surgery and was so brave. She never shed a tear. She was telling the nurse about her dogs Buck and poppy.It was a tumor coming from the kidney and unfortunately, the kidney had to go. She's not done yet. We still have to put a port in her chest for chemo."

When the story was shared in the group's meeting, Rob said, "it hit home for some of the guys and they wanted to do what they could to support her." With some of the group members even shaving their heads for her.

Hubble Homes proudly stepped up for 2020, and has started the initiative of an Employee Giving Program. Hubble Homes employees are eligible for a 50% gift match on donations of $50 or more, up to $2,000 in donations ($1,000 match limit) per year. Employees may support as many organizations as they would like, within the $2,000 limit.

Not only did "The Least" donate $2,000 to McKinley's cancer battle but Hubble matched 50% of that donating an additional total of $1,000 to her recovery! We are all hoping for the best in McKinley's battle with cancer. With employees like Rob Matthews, we're helping to make a difference in the world and our community.

Since 2009, "The Least" has been providing support to anyone in need. Each year, they host an auction to help raise money for community members that have fallen on hard times. They pay for student’s school lunch accounts that have been overdrawn, have anonymously contacted landlords to help pay people’s rent, provided Christmas gifts for struggling families, and sent money for groceries to a senior center in Emmett during COVID-19. Hubble Homes is proud to have supported this organization in the past, and even helped to raffle a Harley to raise money for a Scoliosis foundation.

We are processing your request. Please be patient as this may take a few seconds.

We are processing your request. Please be patient as this may take a few seconds.

WHY BUILD WITH HUBBLE